We left Santa Cruz very early in the morning, in an attempt to get into Big Basin State Park without reservations. Well, we had reservations, they were just for the following week. In case you missed that fiasco, here's the story. I was really nervous about getting into the park, but we both felt it was worth a shot.

My skilled and brave driver had mapped out a course to Big Basin, and I hadn't even looked at it, since this is his realm of expertise. Let's just say the winding, narrow, at times one-lane road again showed what a wise decision we had made in such a compact and maneuverable rv. I wish I had more pictures to show, but I was clinging to my door handle cringing for most of the trip. Here are a couple of tame pics to give you an idea of the terrain: 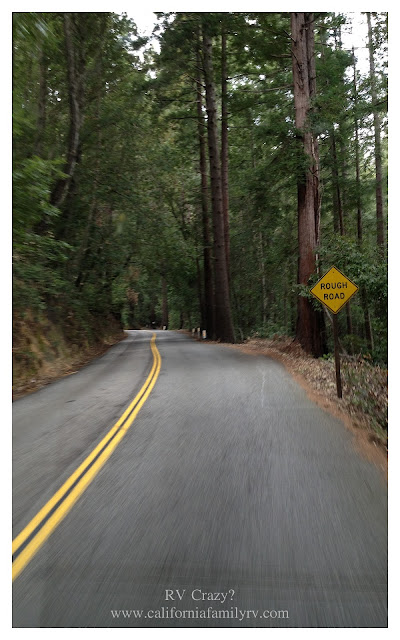 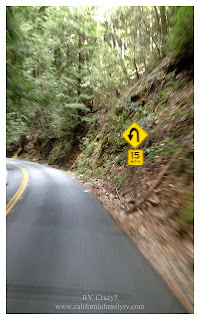 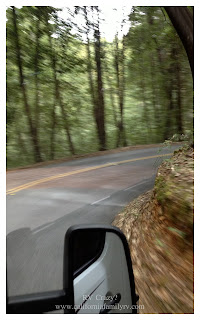 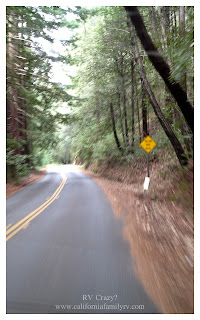 Okay, now the pictures don't even make it look that bad. Oh well, take it from me, the Winnie proved herself on this road. And so did our driver! At least the exciting drive took our minds off of trying to get a spot, but all too soon, we arrived at the park. We were so excited to see the sign! 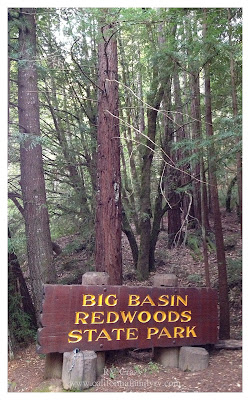 We arrived at about 7:30 am, and waited for the rangers to arrive at 9 am. While we were waiting, we drove through the campsites to see if there were any empty ones. All were full except one unmarked one. We thought it must be closed for renovations. Only 1/2 of one campground was open at the park. Our hopes were not very high.

The ranger who helped me had to have been the nicest State Park employee I have ever met. She was helping two novice hikers who were in line before me, and chatted with them about the best sights to see in the park. I really wish I would have gotten her name, as her customer service was just exemplary. Very nice to see these days.

Anyway, as I embarrassedly explained our reservation predicament to her, and asked if there were any sites available, she reassured me that many other people have made similar mistakes as ours (yeah right! I told you she was SO nice).  She said she thought there may be one available and pointed to it on a map. I said, "is this one without a campsite number?" She said it was, and I excitedly said, "we just drove through there and it was empty!" So, she said she wouldn't even wait for the campground host to arrive, she just checked us in, and said the site was ours! I thanked her profusely and said she had saved my "mom-dom status" with my kids.

She said, "Us moms have to stick together!" Whew. We sure do!! Thank you sweet park ranger. We are all forever in your debt. Our Big Basin vacation is back on!

I walked back to my crew in the Winnie and held up the campsite paperwork. They all cheered and we made our way to our campsite.
We set up camp and decided to try the new dutch oven my lovely in-laws had given me for a Christmas gift. I made meatballs with tomatoes, spinach, and mozzarella cheese covered with bread dough for my first meal. I was a little nervous as I had a very hungry crew and had absolutely never cooked in a dutch oven before. This site was very helpful, by the way! I actually adapted her meatball monkey bread recipe for my own dinner.
Well, I planned on getting pictures once we cut into it, but everyone was so hungry... 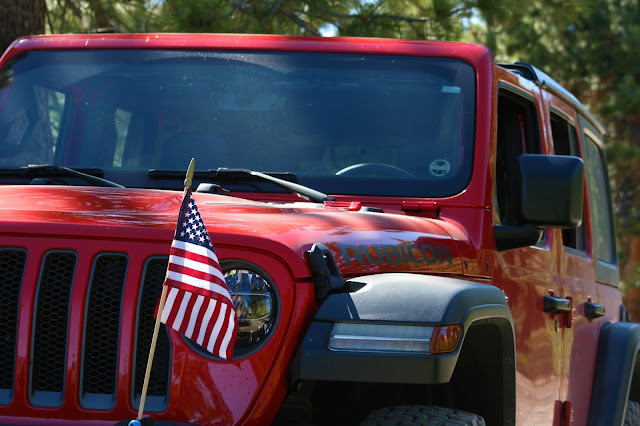